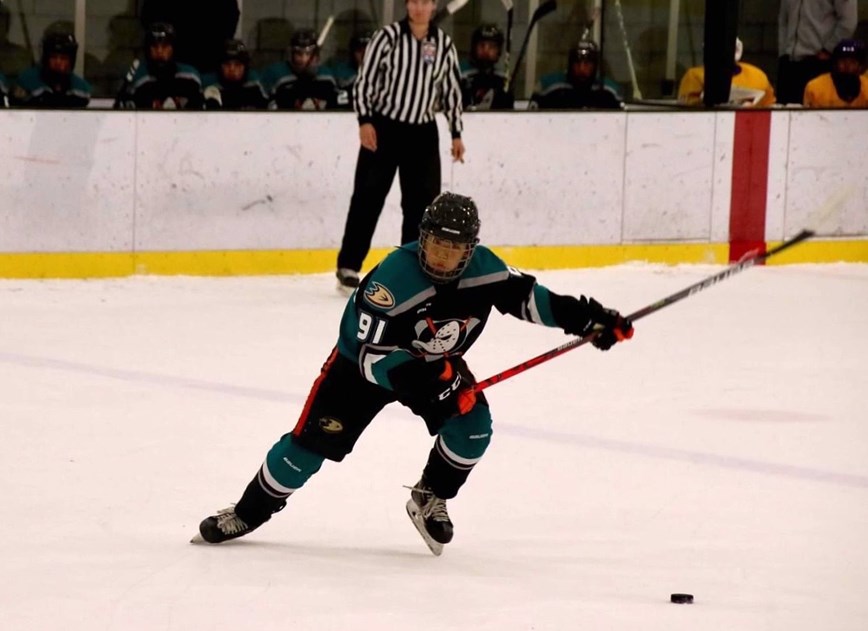 Is it drafty in here? Jr. Ducks popular with Junior clubs

Nine players with ties to the Anaheim Jr. Ducks were selected in the United States Hockey League’s Phase I and II drafts on May 4-5.  Previously, another nine players were taken in separate Western Hockey League and NA3HL drafts.

The USHL total is the most the club has had taken in one year by the top junior league in the U.S. Since 2015, a total of 28 Jr. Ducks have been picked.

“These kids who get drafted all share many of the same characteristics,” said Jr. Ducks Director of Player Personnel Alex Kim. “All of them are respectful, all of them have good work ethics and good character. All of them are good teammates and good people.

“And all of them are contributors to society in a positive manner, and that’s ultimately what (Director of Coaches) Craig Johnson and I want the club to produce.

“It’s also a testament to all the coaches in our club who worked with these kids when they were younger to lay strong foundations.”

The Jr. Ducks had three 2004 birth year players selected in the Phase I or Futures draft on May 4: center James Hong, who played for the club’s 16U AAA team this past season, right wing Merril Steenari, who played for the 15U AAA team, and defenseman Brodrick Williams.

The 5-foot-9 Hong was selected in the third round (43rd overall) by Waterloo. The youngest player on the 16U AAA team, he led the squad with 72 points, including 43 goals.

The 5-8 Steenari was selected by Sioux Falls in the seventh round (97th overall). He had 68 points, including 28 goals, for the 15U AAA team that earned a berth at the subsequently cancelled USA Hockey Youth Nationals. He also had 29 points in 15 games for Capistrano United in the Anaheim Ducks High School Hockey League (ADHSHL).

The 6-1 Williams was taken by Fargo in the 10th and final round (147th overall). He and Hong both attended Optimum Hockey Academy at Great Park ICE in Irvine.

“They’re great role models for younger kids,” Kim said. “They’re in front of them every day doing extra work. The younger players see how they carry themselves and then see these opportunities come up for them.”

Six more former Jr. Ducks were selected in the Phase II draft on May 5. That draft includes all other players who are eligible for junior hockey and not protected by other USHL teams.

Garrett Wright was taken by Omaha later in the eighth round (118th overall). The 6-1, 182-pounder is a 2001 who spent the past season playing in Moose Jaw and Regina of the major junior Western Hockey League.

Brett Roloson went next, to Sioux City in the 12th round (169th overall). The 6-1 center is a 2000 who scored 22 points for Powell River and Merritt of the British Columbia Hockey League this past season.

A current Jr. Duck, center Jason Stefanek, was picked in the 15th round (218th overall) by Youngstown. The 5-9 Stefanek is a 2004 who scored 44 points for the 15U AAA team last season. He added 22 points in 13 ADHSHL games for Placentia-Yorba Linda.

Tyler Shea was selected eight picks later (226th overall) by Dubuque. The 5-10 goaltender is a 2001 who had a 2.92 goals-against average and .922 save percentage while playing for Austin of the North American Hockey League as an 18-year-old.

“Many of these players (drafted in Phase II) had to wait for it to happen, but it shows that if you keep working at it coaches and scouts will notice,” Kim said. “Now, these players have to work harder than ever because there is another set of expectations on them. They have to meet or exceed those because these teams will expect you to perform.”

Former Jr. Duck Christian Kim was selected by the Vancouver Giants in the WHL’s annual Bantam draft on April 22. The forward was taken in the seventh round (135th overall).

Previously, four more 2005 birth years with ties to the club were taken in the WHL’s U.S. Prospects Draft on March 25. Those four were current Jr. Ducks Miles Roberts and Jason Zaccari and former Jr. Ducks Ze’ev Buium and Ty Henricks. Roberts is a goaltender, Henricks is a forward and Zaccari and Buium are defensemen.

The selections gave the club a total of 16 in WHL drafts since 2015.

A quartet of players with ties to the Jr. Ducks – all forwards – were selected in the NA3HL Entry Draft on April 23.

Dylan Contreras and Josh Hyden, who were teammates on the 16U AAA team this past season, were taken by Missoula, Logan Gallaher, a member of the 18U AAA team, was picked by Texas, while former Jr. Duck Liam Massie was tabbed by Wilmar.

Massie, a 2001, played both AA and AAA hockey for the Jr. Ducks through 2018. He has played for Ontario in the WSHL the past two seasons.

“This is a bright spot during an unusual time for these kids,” Kim said. “Hockey is on pause for them but a lot of them play because they want to advance in the game.

“These drafts reinforce the club’s track record of helping players do that.”